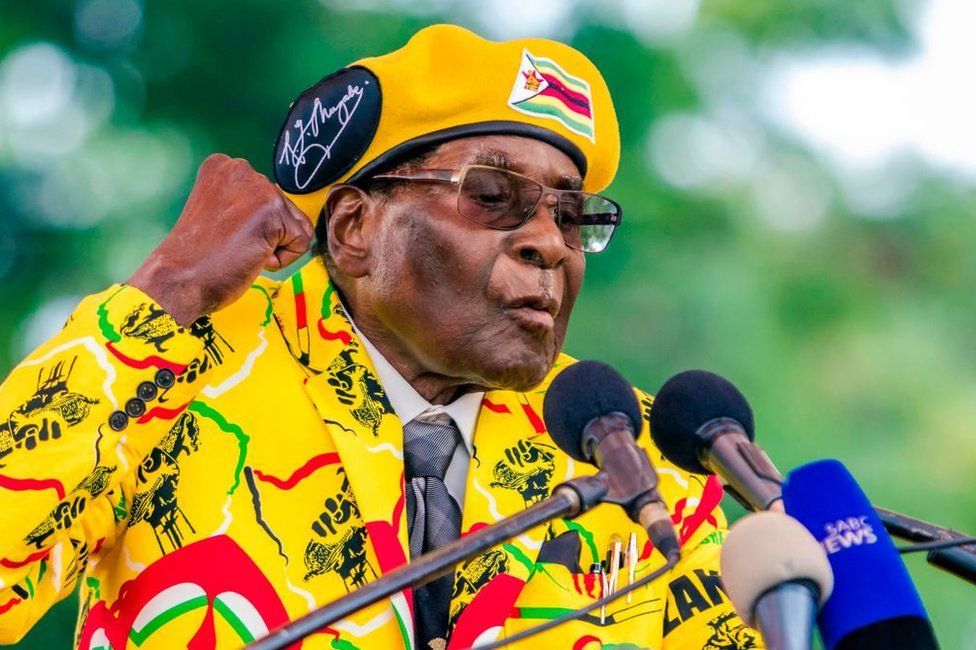 It is exactly five years since Zimbabwe’s ex-president left power but life is now worse for many.

Source: Zimbabwe without Robert Mugabe: What has changed? – BBC News

A climate of fear still lingers in Zimbabwe, five years after long-time ruler Robert Mugabe was deposed. As the country marks this milestone, few people are willing to speak openly about whether the government that took power has honoured its promise of transformation, either in terms of raising living standards or guaranteeing human rights.

“I mind my own business,” one street vendor tells the BBC, who does not want to be named. “People who speak their minds – some end up in prison. So, I keep things to myself and do what I have to do to survive.”

Little has changed in this regard since President Mugabe’s departure. Many ordinary people and critics still face arrest for insulting the president, say human rights lawyers.

Tendai (not his real name) sells groceries out of his car boot – washing powder, deodorant, snacks and cooking oil are all neatly stacked up. Even though he is a university graduate with a double major in marketing and human resources management, he says being a street vendor is the only way he can earn his living because there are no jobs available.

“Things are the same or even worse since Robert Mugabe left. But while it might sound far-fetched, I still have hope about the future,” he adds.

Inflation today is 268% – many times higher than it was when Mr Mugabe left office, according to data from Zimbabwe’s national statistics body. Meanwhile, the proportion of Zimbabweans in extreme poverty has almost doubled – from 30% in 2017 to 50% during the coronavirus pandemic, says the World Bank.

This has driven more people into desperation.

Harare is teeming with informal traders, including more and more middle-class people selling goods from their cars.

One woman sells fresh meat out of plastic bins in her van to customers who arrive on foot or by car for smaller and smaller rations of meat – some paying as little as $0.50 (£0.42) at a time.

“Personally, I wasn’t one of the people who was happy when Mugabe resigned. People didn’t know that they were celebrating coming disaster,” the meat vendor tells the BBC.

“They thought after he left they would have bread with margarine and jam, eggs and milk – but that isn’t what has happened.”

Harare’s streets erupted as people celebrated Mr Mugabe’s resignation on 21 November 2017. A week earlier tanks had rolled on to the capital’s streets as the military seized the public broadcaster and placed the 93-year-old president under house arrest.

Mr Mugabe’s former vice-president, Emmerson Mnangagwa, emerged as the hero who stood up to the strongman. He vowed to end poisonous and polarising domestic politics, to turn around the economy and repair fractured relations with Western nations.

However, sceptics pointed out that he had worked closely with Mr Mugabe for many years and had been accused of playing an instrumental role in some of the worst atrocities of the Mugabe era, and wondered whether he was really the man to deliver change. Mr Mugabe’s Zanu-PF party remained in power.

“I went into government because I loved my country and not the coup,” said award-winning author and lawyer Petina Gappah, during an online discussion held by political think-tank Sapes Trust to review the post-coup era.

She had been recruited as an adviser on international re-engagement in the foreign affairs ministry but lasted just 18 months. She says she left in sorrow, not in anger and in disappointment, not bitterness.

“Some leaders called it a miracle, we had sense that that something fresh was coming – unfortunately it didn’t come,” she said.

Last week’s visit by a Commonwealth delegation considering Zimbabwe’s readmission suggests there has been a positive shift since President Mugabe left. Such a visit would previously have been unthinkable.

Zimbabwe pulled out of the body in 2003 blaming what it called an “Anglo-Saxon unholy alliance against Zimbabwe”. The year before, Zimbabwe had been suspended for human rights violations including violent takeovers of white-owned farms and the persecution of opposition members.

Zimbabwe’s re-entry to the Commonwealth would be a symbolic win for President Mnangagwa’s government – a sign that its quarrel with the UK over land was over, analysts have told Gappah.

The main opposition party – the Citizen’s Coalition for Change (CCC) – wants pre-conditions set before Zimbabwe before can re-join, citing the continuing persecution of its members, journalists and other government critics.

In the week of the Commonwealth visit, 15 CCC members including MP Godfrey Sithole were finally released on bail after spending five months in jail for allegedly inciting public violence in clashes with government supporters in Nyatsime, south of Harare, which they say are politically motivated. Job Sikhala, another legislator, remains behind bars on the same charges.

While the Commonwealth delegation led by Assistant Secretary General Luis Franceschi said Zimbabwe had made “very impressive progress” in meeting the conditions, member countries will have to consider whether economic, human rights and electoral reforms are sufficient for readmission.

At this stage, the Zimbabwean government remains hopeful. “We have done everything that is possible to be readmitted – there are countries in the Commonwealth that are comparable to us,” says Zanu-PF spokesman Nick Mangwana.

“This government is more sensitive to the needs of business. They could do more but you can’t compare it to the previous government,” says Kurai Matsheza, who is the president of the Confederation of Zimbabwe Industries manufacturing lobby.

He says there are fewer company closures than in the Mugabe era, adding, “the policy shifts, the price controls are not at the same level they used to be”.

The government has attracted hundreds of millions of dollars in investment, mainly in mining. Platinum giant Zimplats will invest $1.8bn over the next 10 years, following negotiations with government. Meanwhile, Chinese miner Zhejiang Huayou Cobalt is set to invest $300m in its lithium mine.

A steel project that stalled under Mugabe has been revived. The horticulture industry that had collapsed is now back following investment in irrigation. Wheat production is at a 17-year high. Roads and dams are being repaired and constructed.

However, this is not yet translating into enough jobs to prevent young Zimbabweans from doing everything they can to go elsewhere to make lives for themselves.

So what is the government doing about it?

“Now 50% percent of revenue is going into capital investment – to improve lives you have to improve outcomes so government had to put in enablers, which is infrastructure,” says government spokesman Mr Mangwana.

“The Word Bank says the country has reached middle-income status, which means incomes have improved. We have not arrived at our destination, what we have is work in progress,” he adds.

But Ranga Mberi, editor of business news website Newzwire, says more is needed: “While it is good to talk about growth and investment in mining, what matters is what’s on the food table and in people’s pockets.

“Inflation is the big issue that people will judge him [Mnangagwa] by.

“The test is that everything has to translate to full stomachs. And that is the big test for Mr Mnangagwa going into 2023.”