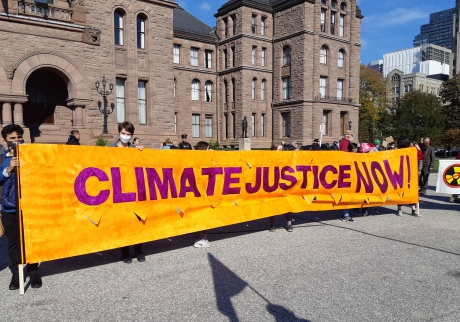 As the planet’s elites wined and dined at the COP26 meetings in Glasgow, the anger of protesters decrying the continuing greenwashing of business-as-usual was palpable. They were described as the least accessible climate meetings ever. And after 25 earlier rounds had failed to stop the rise of global emissions, protesters decried the continual record of failure that has led humanity closer and closer to the edge of climate breakdown.

This summer the IPCC declared “Code Red for Humanity”, but so-called “world leaders” in Glasgow failed to come to an agreement to act with the urgency required. Behind closed doors, fossil fuel lobbyists made up the largest delegation, outnumbering representatives of Indigenous peoples by a ratio of 2 to 1; bank and corporation CEOs outnumbered union representatives by a wide margin as well. The domination of the climate talks by the industries that are most responsible, and government representatives whose interests are closely aligned, means that there are real structural barriers to taking real action.

They discussed the business opportunities afforded by the “net-zero” economy but refused to take real steps to phase out fossil fuels. They ignore the cries for justice for Indigenous peoples standing up to continued colonization of their traditional territories worldwide, and continue the same colonial and settler colonial policies. The richer countries’ carbon intensive economies are by and large responsible for cumulative global emissions, but it is countries in the global South who are bearing the brunt. Promises that the richer countries would pay a climate debt to pay for adaptation for populations in the global south have continually been downgraded and avoided.

The one declaration that “the end of coal is in sight” proved hollow as the initially 190 countries reported to have signed a pledge to reduce coal use dwindled to 77 and only 10 countries have pledged to phase out coal completely. The final agreement language was weakened to call for the “phase down” of coal – and no mention of other fossil fuels.

PM Justin Trudeau posed as a climate champion, pretending his climate plan and Canada’s record on tackling climate change was better than the rest of the G20: in reality, Canada is in the top ten for responsibility for historic, cumulative emissions and number 1 in per capita emissions. Hidden within these statistics are huge inequalities: an Oxfam report from last year showing the carbon emissions of the richest 1 percent more than double that of the poorest 50 percent of humanity also reported that “[t]he richest 10 percent of Canadians were responsible for about a quarter (24%) of national cumulative carbon emissions between 1990 and 2015, nearly as much as the poorest 50 percent of Canadians (29%).”

Among the richest 10 percent are those who profit most from fossil fuel production and consumption, and the fact the Trudeau’s climate plan will be funded from revenues by the publicly owned Transmountain pipeline that is being constructed over unceded Secwepemc territory proves the hypocrisy of promises he made in 2015: “to repair this most important relationship” with Indigenous peoples and to act to meet Canada’s commitments to meet the 1.5 degree ambition articulated in the Paris agreement.

He called for more market based solutions, including a new on cap oil and gas emissions and pushing for a single global carbon price. These policies are too mild to reduce emissions rapidly enough and do not prevent new oil and gas exploration, development and production.

As Greta Thunberg put it, “Here’s a brief summary: Blah, blah, blah. But the real work continues outside these halls. And we will never give up, ever.”

And the global climate justice movement emerged partially from pandemic restrictions and made its mark on November 6th. Over 100,000 marched in Glasgow, 40,000 in Amsterdam, 20,000 in London and in all there were over 300 actions worldwide mobilizing hundreds of thousands of people under the banner of climate justice. There were a number of actions across so-called Canada, including hundreds in Montreal and Ottawa and over a thousand people rallied in Toronto.

The coalition of climate, racial and social justice and labour groups that came together to organize the rally in Toronto had its first meeting exactly one month prior to the day of action. In this short timeline, these groups were able to agree to intersectional climate justice demands that are a step forward and provide a clear path to a real transition to the zero carbon economy and leave no Indigenous people, community or worker behind: Respect Indigenous sovereignty; Phase out fossil fuels; Just Transition for communities and workers; and Global Justice. The fact that these climate justice demands were adopted quite smoothly reflects the dire state of the crisis and the openness of many to see the power for change coming from the coming together of grassroots struggles from below.

The highlight of the rally was when Skyler Williams, Six Nations spokesperson for 1492 Land Back Lane and Logan Staats, a Six Nations singer-songwriter took the stage. After the victory of the occupation at 1492 Land Back Lane earlier this year, when the land development company declared they were walking away from the development (if not legal proceedings), Skyler has been working to build support for the Wet’suwet’en people who are under attack again for opposing CGL pipeline construction on Gidimt’en territory. He and Logan traveled out to the Yintah (Wet’suwet’en territory) in October and marvelled at being able to drink from the pristine river Wedzin Kwa – not for long if CGL rigs continue drilling under the river – and left immediately after the rally to go back out to the west coast. Skyler said “If you can’t get boots on the ground in the Yintah, out in Wet’suwet’en, then you need to be out on these streets. You need to be on those railroads. You need to be on every bit of colonial infrastructure that we can do to make sure that their voices are amplified.”

Everyone was energized by Logan Staats rendition of his brilliant song “6 miles each side of the river”, which refers to the Haldimand tract promised to Six Nations in 1784 but stolen away bit by bit over the centuries. The rally organizers donated $1,500 to help with travel costs on top of $1,492 donated by the Steelworkers union. A key organizing task in the near term will be to organize local actions in solidarity with Wet’suwet’en and raise funds to send trade unionists and local activists to the Yintah. There is an action this Friday, November 19th at 11:30 am starting at 155 Wellington St Win solidarity with Wet’suwet’en land defenders after the eviction of CGL workers under Wet’suwet’en law.

Andria Babbington spoke as the first Black president of the Toronto and York Region Labour Council and called for the trade union movement to do more for justice for Indigenous peoples and for Indigenous sovereignty to be respected. She also called for justice for workers: “When we start seriously moving away from fossil fuel industries, we must support the affected workers and their communities” transition to the green economy and “green jobs” in healthcare, education, community services, building public transit, zero-emission energy systems and massive energy retrofits. “We need a job-rich transition. We need great jobs for all workers. Things like Community Benefits Agreements so racialized workers have equity access to jobs in billion dollar green infrastructure projects.”

And she added, “Climate justice is union business.”

Contingents came to the rally representing the United Steelworkers (USW), Canadian Union of Public Employees (CUPE), Ontario Public Service Employees Union (OPSEU) and the International Brotherhood of Electrical Workers (IBEW). For union locals and other bodies to take on the demand to phase out fossil fuels in a country like Canada, where there are significant union sectors in oil, gas, coal and mineral extraction, pipeline construction and other carbon intensive industries, means there is a growing force within the union movement that can fight to win workers in these high carbon industries to support a just transition to a green economy.

Other speakers were equally eloquent, including Alice Zhu, an environmental science Phd student at U of T, who spoke clearly about how high the stakes are: “This year’s COP needs to be a turning point. We must leave oil in the ground. Every moment we continue to rely on fossil fuels, we are taking one step closer towards an unlivable planet.” While arguing that individuals can take actions on their own “this is not enough. We need our government to step up and take action now.”

Zoe Keary-Matzner, a young climate activist and one of seven youth suing the Ford government for weakening their 2030 climate commitments with the help of EcoJustice, sliced through the government’s inaction: “They say nice words like ‘sustainability’ or “reconciliation” but do they mean them? Old growth forests continue to be cut down and industries continue to pollute the air, the lakes and the forests. And they say ‘sustainability’ but too many people still don’t have access to food and housing and too many First Nations don’t have access to clean drinking water, while billionaires grow richer and richer every day. This is not sustainable! And they say ‘reconciliation’ but Indigenous leaders continue to be arrested and jailed by the RCMP for defending their ancestral lands and waters.”

People of all ages participated, including families with children, students, workers and seniors, but there was, understandably, hesitancy for many people to attend an in person rally due to increasing case numbers and the fact that children under 12 are not yet vaccinated. If there had been another week to build, the rally could have been significantly larger.

Regardless of size, this rally in Toronto, along with the 300 plus actions globally shows that the climate movement has not gone away and is increasingly absorbing the reality that looking to governments and industry to lead the just transition will always lead to disappointment and that movements from below have to develop their power together against the capitalist system before it’s too late. Crucially, Indigenous land defenders asserting sovereignty over their traditional territories have blocked critical energy infrastructure construction that has stopped or halted carbon emissions equivalent to 25 percent of total annual US and Canadian emissions. These assertions of sovereignty over land are anti-capitalist, not only because they block raw materials needed in the production process, but because they  assert their collective right to steward and live off all of their land “as a system of reciprocal relations and obligations” with all the living creatures and resources of the environment.

At the frontlines, Indigenous land defenders in Wet’suwet’en, Secwepemc, Six Nations and in many other Indigenous communities across Turtle Island, are on fire and taking direct action to stop the CGL pipeline and protect the river. They are committed to struggle for their sovereignty and have declared that they will never give up. The centuries of unending resistance to French, British and Canadian colonialism and settler-colonialism are testament to this. Building support for these actions, by raising funds to get people out to the Yintah, and building actions to block rails, roads, ports and other colonial infrastructure is important. But we need more than just a minority willing to chain themselves to the machine, but mass mobilizations of people, and especially workers, to create the pressure from below that can keep CGL from destroying the river Wedzin Kwa, and pose an alternative to the ongoing settler colonial capitalism of the Canadian state.