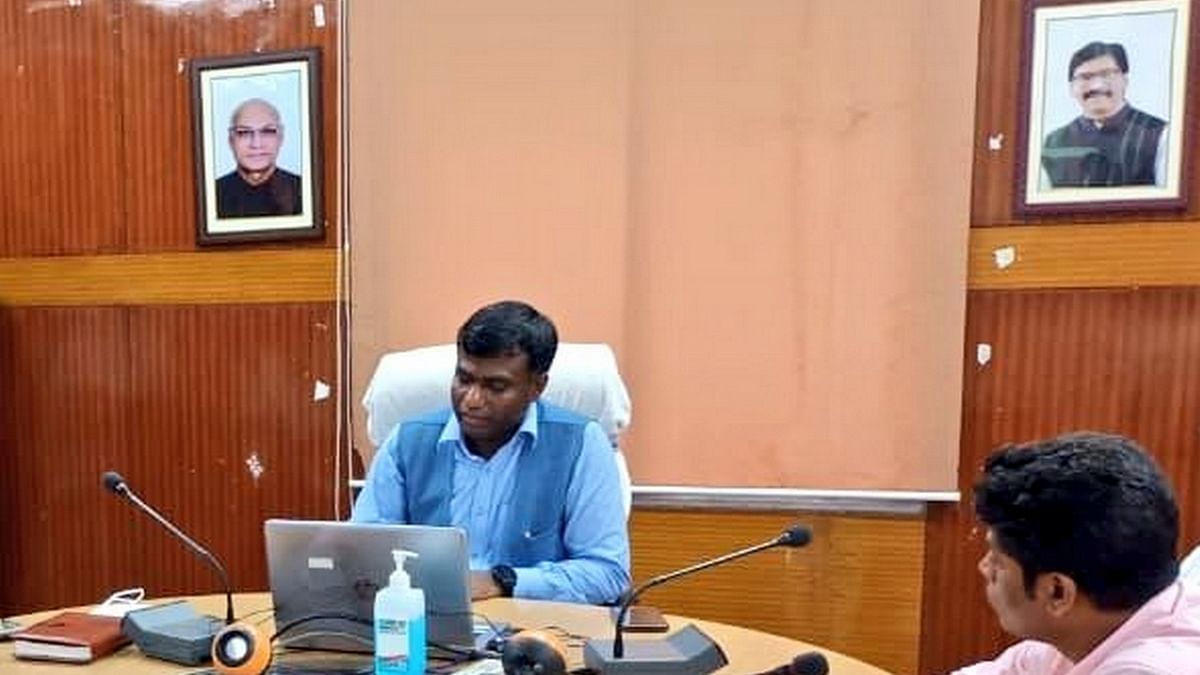 New Delhi: A feud of epic proportions has been raging between Bharatiya Janata Party (BJP) MP Nishikant Dubey and Deoghar deputy commissioner Manjunath Bhajantri, who is reputed to be close to Jharkhand Chief Minister Hemant Soren.

While Dubey told ThePrint that Bhajantri has filed 37 FIRs against him and is “at war with me at a personal and political level”, the IAS officer asserted that all the FIRs are “full of substance” or else they would have been quashed otherwise.

The battle between the two, which has been going on for about a year, came to a head when Bhajantri filed an FIR against Dubey, his two sons, BJP MP Manoj Tiwari, and others for allegedly forcing the clearance of a chartered flight from the air traffic control (ATC) room of Deoghar Airport on 31 August.

Dubey claimed he had all the necessary permissions and that Bhajantri had “breached national security”. Days later, the Delhi Police lodged a ‘zero FIR’ against the IAS officer for sedition and for interfering with national security following a complaint from the MP.

These FIRs were accompanied by a trading of verbal gunfire over Twitter.

“You carry on with your sycophancy to the Chief Minister and stay happy,” Dubey said tweeted last week, alluding to Bhajantri’s closeness to Soren.

In a fresh development, Dubey has moved court against Bhajantri to quash the FIR related to the airport incident, while Bhajantri has written to the Directorate General of Civil Aviation (DGCA) explaining Dubey’s alleged violations and seeking action against him.

While several senior IAS officers in Jharkhand have told ThePrint that Bhajantri is an “upright”, by-the-book administrator whose suspension has repeatedly been sought by  Dubey, the BJP leader claims that he was subjected to harassment by a “partisan officer”.

A B. Tech graduate from IIT-Bombay and hailing from a humble rural background, Manjunath Bhajantri is a 2011-batch IAS officer from the Jharkhand cadre.

He was deputed at various posts, including private secretary to the Minister of State, Railways, and to the vice-chairman of NITI Aayog, under the Modi government before returning to serve in Jharkhand at the end of 2020.

Bhajantri was appointed as the deputy commissioner and district election officer (DEO) of Deoghar, where he crossed paths with Dubey, the Lok Sabha MP from Godda constituency which encompasses the districts of Deoghar, Dumka, and Godda.

The conflict appears to have been sparked in the course of the by-election to Madhupur assembly constituency, which is located in Deoghar district, in April 2021.

It was in the course of this election that Bhajantri sent a letter to the Election Commission (EC), alleging that Dubey had violated the Model Code of Conduct (MCC).

Six months later, in October 2021, the Jharkhand chief election officer informed the EC that five different FIRs were lodged against Dubey at the behest of Bhajantri. These involved violation of the MCC, months after the polls had ended.

Dubey had also complained about this, citing “malafide intention” of the Deoghar deputy commissioner.

Thereafter, the EC probed the reasons for the delay in filing the complaints. It was ultimately not satisfied with Bhajantri’s submissions, which included the statement “crime never dies”.

In December 2021, in a detailed order that ThePrint has seen, the EC directed the Jharkhand government to remove Bhajantri from his post as DC and to initiate disciplinary proceedings against him.

The EC also noted that one of the FIRs pertained to Dubey making personal remarks against the Bhajantri on Twitter, including calling him an “agent of the JMM”.

“It is alleged that Nishikant Dubey wrote in the aforesaid post that Sh. Manjunath Bhajantri was working as an agent of the JMM during the election period. The aforesaid incident was in the nature of criticism of the DEO… and the same doesn’t violate any provision of the Model Code of Conduct,” the EC said in its order.

The Jharkhand government appealed to the EC to reconsider its decision about Bhajantri, which was later rejected. The state is yet to take action against Bhajantri, who continues to be the Deoghar deputy commissioner.

This, of course, was not the end of the tussle.

This July, Dubey had demanded Bhajantri’s suspension for putting up a hoarding of Prime Minister Narendra Modi and Jharkhand CM Hemant Soren together at the venue of a BJP rally in Deoghar.

He had also tweeted that the deputy commissioner had “reached an extreme level of goonda raj”.

Speaking to ThePrint, Dubey alleged that all the FIRs against him were “motivated”, while Bhajantri has insisted that each of them were filed because of substantial violations.

“I became an MP in 2009. Between 2009 and 2020, there were no cases against me barring a few complaints related to the model code of conduct violation. But in the past one year, the Deoghar DC has lodged 37 cases against me and my family members,” Dubey said.

“There are three districts — Dumka, Deoghar and Godda — that come under my constituency Godda. There is not a single complaint against me in Dumka and Godda, but there are three dozen FIRs in Deoghar. So, do I become a villain only in Deoghar?”

Bhajantri, however, told ThePrint that Dubey was a “habitual offender” and he would continue to register cases if he believed laws were being broken.

“He violated rules blatantly.  I and my administration would lodge complaints if rules are broken. Every FIR against him is of substance. He can go to court and challenge them. He can also seek quashing of the FIRs, if they are motivated in nature. I don’t know about other districts, but I will register cases and take action if I see violations,” Bhajantri said.

Dubey has claimed that Bhajantri’s year-long tenure at the Centre ended under a cloud. “Manjunath Bhajantri was on central deputation and he was repatriated to his cadre from the Railway Ministry for corruption,” the BJP MP alleged.

Bhajantri, however, rejected this allegation as “nonsense”.

‘I [first] served as the private secretary to the vice-chairman of NITI Aayog. But I wanted to serve in a ministry that has more public-government involvement. I wrote to the PMO seeking such a position, and I was posted as the PS to Suresh Angadi, (then) minister of state for Railways. He was a gentleman. But he died of Covid,” the IAS officer said.

“Railways asked me to continue with another minister. But I was so heartbroken after his [Angadi] death, I could not continue and sought repatriation to my cadre.”