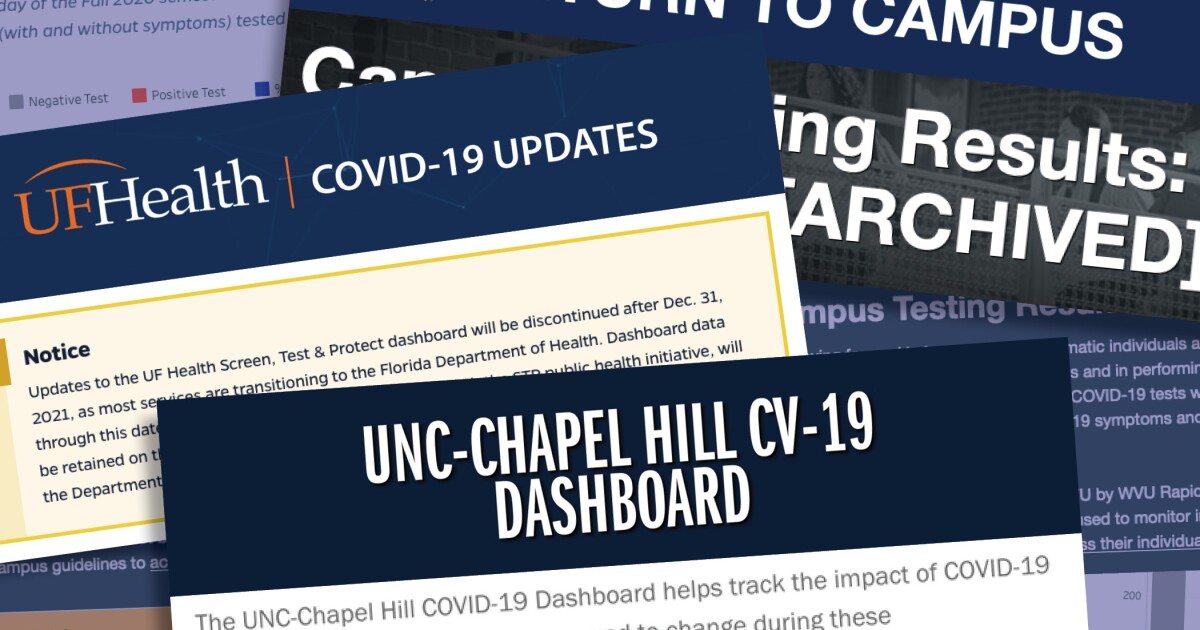 As students return to campus for the spring semester, colleges are seeing a surge in Covid-19 cases thanks to the extra-contagious — but generally less virulent — Omicron variant of the coronavirus. But while some institutions are continuing to publish data on their long-active public dashboards showing case counts, vaccination numbers, and isolation housing capacity, others have started archiving certain indicators or stopped updating their dashboards altogether.

The differing approaches to public disclosure of Covid data reflect the shifting dynamics of the pandemic and the changing significance of metrics that once seemed so critical, as the virus has mutated and human behavior has adapted.

For some campus advocates, like those in labor unions and graduate-student associations, and health professionals and student leaders, the publication of Covid case data is a cause célèbre. They argue that transparency about Covid cases is important for holding institutions accountable and keeping community members safe.

Others say the data is not as important as it used to be, since many people now test themselves at home and do not report their results to their college. The University of Florida stopped updating its Covid dashboard on December 31; the leader of the institution’s testing program told The Chronicle the data was “kind of useless.”

Other colleges and universities have maintained their dashboards but removed particular indicators that officials say are not as helpful anymore. Some experts say providing that information could do more harm than good.

West Virginia University has archived its testing dashboards and will now report vaccination rates only. The website notes that “testing, quarantine, and isolation data will not be reported for the spring 2022 semester,” and that county and statewide statistics can be found on the West Virginia Department of Health and Human Resources’ website.

In an email, April Kaull, a spokesperson for WVU, explained that the university has adapted its protocols to reflect updated CDC guidelines related to isolation and quarantine. The CDC reduced its recommended isolation time from 10 days to five.

“As a result, this data became less informative for our health and safety experts as they believe hospitalization rates and vaccination status are better indicators at this time,” Kaull said.

Last week the University of North Carolina at Chapel Hill paused its dashboard for several days, causing a stir on Twitter. Some speculated it was because a report showing high projected case numbers had been leaked to NC Policy Watch, but a UNC spokesperson told The Chronicle it was part of a normal review of the information presented on the dashboard.

There is a calculation happening at colleges and universities as to whether the potential panic that could come from large numbers on a dashboard is actually a greater threat to campus operations than the increasing numbers themselves.

Updates resumed on Monday, the start of spring-semester classes. The dashboard now includes information on booster shots and no longer reports on-campus quarantine and isolation figures, as UNC has announced that students who test positive are strongly advised to isolate at home.

But the disclosure policies of institutions in the UNC system haven’t stopped individuals from taking their own measures. Luke Carman, a doctoral student in math education at North Carolina State University and a co-chair of his graduate-workers union, has created a tracker of his own — only this one tracks how each UNC system campus is responding to the coronavirus this semester. The document meticulously tracks the Covid-policy changes each university is making, with links to their dashboards as well.

In his personal life, Carman said, he relies on four different dashboards every week when making decisions.

“I live in Durham, N.C., and my wife is an elementary schoolteacher,” he said. “I check the school system’s dashboard for my wife. I check Durham County’s dashboard to see how things are going. I check the North Carolina state dashboard through the Department of Health and Human Services, and I check N.C. State’s. We make decisions as a family about what is safe and what’s not safe depending on the prevalence of Covid spread that exists in all four of those things.”

N.C. State has recorded 1,756 Covid cases in the last month, according to its dashboard, with a seven-day rolling average of 194 on January 12. A spokesperson said that the Omicron wave has certainly been a tough situation but the university’s experience with it has not been unique.

Carman had this to say: “What happens on campus can very easily spread to schools or vice versa and to anybody’s family at any time. The university does not just exist on its own. It exists in these broader communities.”

Institutions have been quietly modifying their Covid dashboards for several months now. Chris Marsicano, an assistant professor of educational studies at Davidson College and the founding director of the College Crisis Initiative, told The Chronicle that colleges have been amending or shutting down their dashboards since the summer, when many students returned to campus vaccinated against the coronavirus.

“We are seeing, on average, much more minor symptoms and a much greater spread,” Marsicano said. “There is a calculation happening at colleges and universities as to whether the potential panic that could come from large numbers on a dashboard is actually a greater threat to campus operations than the increasing numbers themselves.”

In the early days of the pandemic, Marsicano said, case numbers were “directly proportional” to the actions colleges took to reduce Covid spread. That’s different now, as vaccinations and boosters are widely available and CDC guidelines continue to change.

“The difference between knowing that 15 percent of your campus is testing positive for Covid and 30 percent is testing positive for Covid doesn’t necessarily change the public-health response, especially if you have a vaccination and a booster,” Marsicano said. “I’m sort of sympathetic to both sides of this debate — the side that says, ‘We need more information to be able to better assess our risk as we step on campus, as faculty, staff, and students,’ but also to the other side that says, ‘People will be afraid of large numbers in such a way that it could inhibit other safety measures.’”

High numbers, Marsicano said, could compel faculty, staff, and students to leave their campuses for their hometowns, which may be less able to handle case surges than their institutions. And they could unknowingly bring the virus along with them.

For example, Marsicano said, North Carolina’s Research Triangle — which is anchored by Duke, UNC-Chapel Hill, and N.C. State — has several major hospital systems. Other areas around the state that students or staff may call home are not as equipped to handle a surge in cases.

“I think at the beginning of the pandemic, more information was absolutely good,” Marsicano said. “Now, I think more information is still good, but ensuring that that information has context and guidelines is probably just as important, if not more important.”