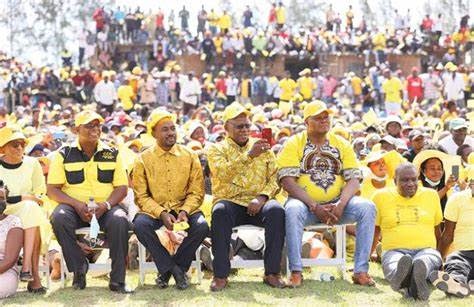 POLICE claim they have been fair in implementing provisions
of the Maintenance of Peace and Order Act (Mopa), and have instead blamed
opposition parties and civic society organisations (CSOs) of failing to adhere
to the Act’s provisions when applying to hold rallies or protests.

Ruling Zanu PF party events have, however, never been
barred or disrupted.

National police spokesperson Assistant Commissioner Paul
Nyathi told NewsDay that some of the reasons opposition rallies and protests by
CSOs are barred included their failure to employ marshals, and to stick to
scheduled times, which police believe pose security threats.

Nyathi also said the opposition and CSOs were failing to
advise local residents of their planned events.

“There is a difference between notifying and working on the
security modalities with the police, if you are to go by Mopa,” he said.

“There are certain parameters which conveners of meetings,
public gatherings and demonstrations have to comply with on their part. Merely
notifying does not mean that a person has fulfilled all the conditions that are
outlined under Mopa. The public must be adequately advised on the security
measures they have put in place when they want to do some of these gatherings
in consideration of the rights of others. It is not just a matter of notifying and
ending there. There are security considerations that have to be made by the
conveners. When they go to the police and are told that they have not met these
security considerations, they start complaining.”

Crisis in Zimbabwe Coalition (CiZC) had also planned a
protest on July 22, but it was stopped under Mopa.

CiZC president Peter Mutasa said: “We submitted our
notification after engaging a group of law experts to craft the notification to
ensure that we did not err. But we failed, despite that which shows that the
law enforcement officer wants to effect a blanket ban on protests. Section 8 of
Mopa allows for negotiation and consultation of the concerned party with the
police. The law appreciates that not every ordinary person could be fully
cognisant of it.”

The opposition CCC feels that Mopa was now a new tool of
oppression.

Party spokesperson Fadzayi Mahere said: “It’s not correct
that we do not adhere to the requirements of Mopa. Rather, when we do invoke
the provisions of this statute, we are met with flimsy reasons for the banning
of our rallies such as the fact that there isn’t enough manpower or
misrepresentations, and that someone else is using our chosen venue when this
is not true.

“What is beyond doubt is that the playing field is not free
and fair, but that will not stop us from escalating our nationwide mass
mobilisation programmes.”  Newsday