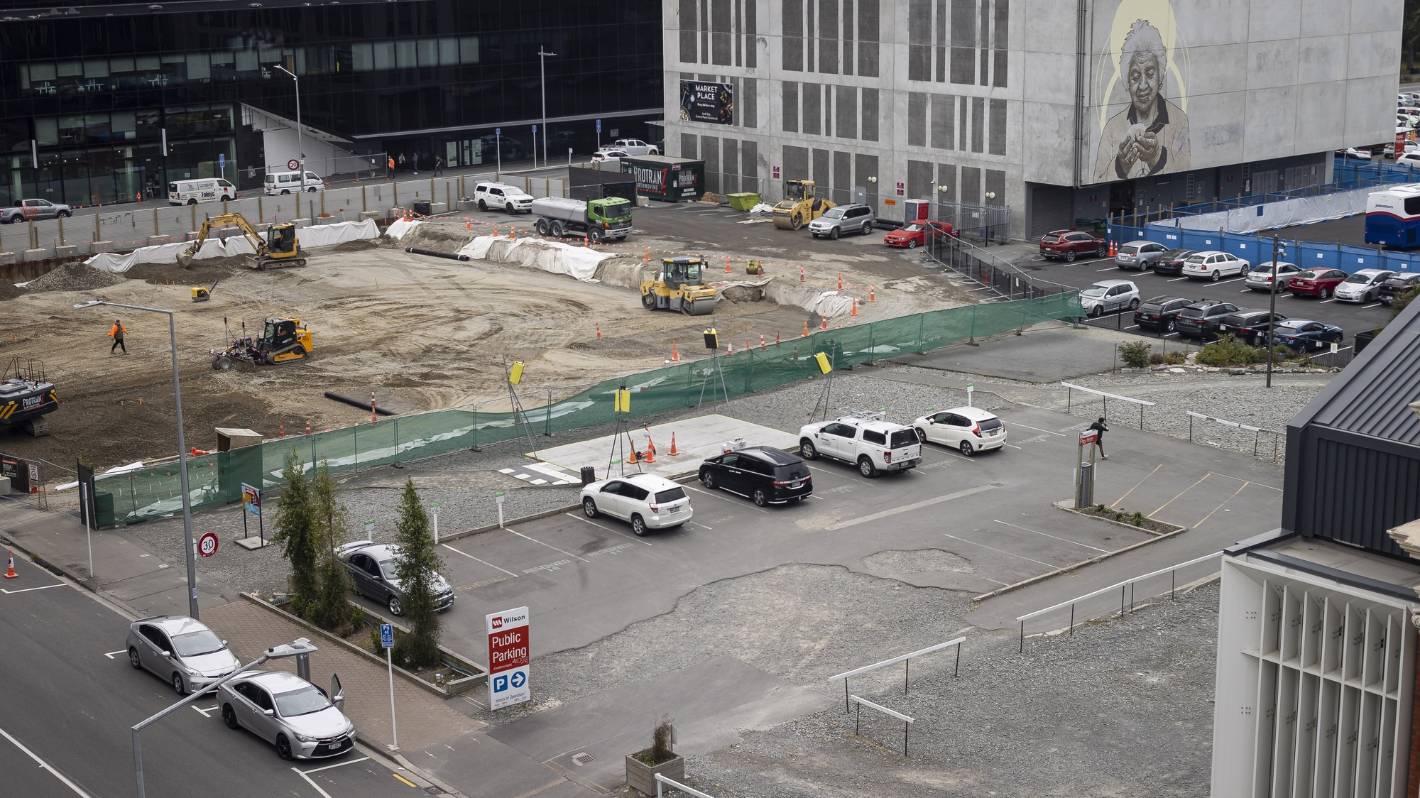 The site that was nearly sold to Wilson Parking is in the foreground, with the new Court Theatre under construction in the background.

In March, city councillors voted not to sell a 2000m² plot on Gloucester St to the parking giant – a decision that went against advice from council staff.

Wilson Parking had planned to build and operate a car parking building on the site and entered a conditional agreement with the council in November 2021. The site sits in the Performing Arts Precinct, between the Isaac Theatre Royal and the site of the new Court Theatre.

More than 80% of public submissions on the sale were opposed to it.

“Wilson Parking has serious concerns regarding the Council process which was undertaken, and the ultimate decision made yesterday,” a solicitor for Wilson Parking wrote to the council the day after its decision.

“Wilson Parking is taking advice on this matter and I expect to provide a formal response in due course.”

Asked on Monday whether a formal response had been received, the council’s head of facilities, property and planning, Bruce Rendall confirmed it had not.

Rendall said he did not expect a legal challenge from Wilson Parking and that the council acted lawfully.

Wilson Parking refused to answer questions about the emails and instead issued a statement saying: “Wilson Parking NZ reaffirms we are disappointed with the outcome.”

The Government’s wage subsidy bill has now topped $12b, with Wilson Parking among the companies to receive more money through the latest round of payments. (First published July 3, 2020)

“We cannot provide further comment on this at this time as we are continuing to work through our options.”

The released emails also show that just hours after councillors called off the deal, a council staffer emailed others and recounted a conversation they had with a Wilson Parking staff member.

“Obviously they are pretty frustrated (borderline angry) about the situation, having spent such cost to date,” the council staffer, whose identity is redacted, said.

“They are meeting with their lawyers tomorrow to ‘discuss next steps’, which I didn’t specifically take as a threat on seeking to recoup funds from [the council] but rather a general debrief which will allow them to determine their options,” the council staffer wrote.

Another contractor involved with the Wilson Parking tender, whose identity is redacted, told council staff in an email that they were incredibly disappointed in the U-turn.

“It does make a complete mockery of the Council tender and procurement system to the point it would seem corrupt,” the contractor said.

“It would appear this decision has been made on a popularity contest,” they said.

“It does question whether we see any benefit [in] spending considerable out lays of money to put viable tenders together when we see these outcomes eventuate.”

Wilson Parking said this contractor was a partner, but “sent the correspondence in their own capacity” and it does not represent the views of Wilson Parking.

Since the council called off the deal, a $4 million outdoor theatre and arts hub has been proposed for the site, which is currently a temporary car park operated by Wilson Parking.