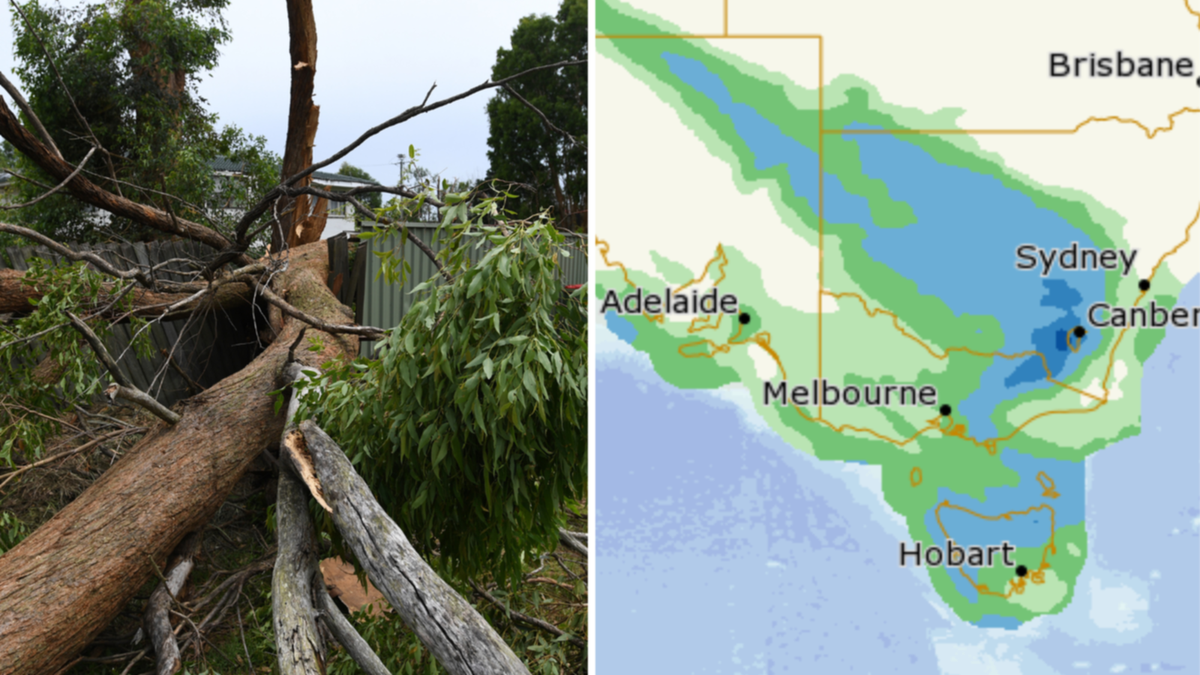 Wild weather has already lashed much of southern Australia, uprooting trees and sending thousands of homes into darkness as destructive conditions caused havoc.

But the Bureau of Meteorology says little relief is on the way, with severe conditions expected to smash the country’s south east as a second cold front moves in.

Watch more storm damage in the video above

Five states are in the firing line as WA, SA, NSW, Victoria, and Tasmania gear up for a the most powerful cold front to hit Australia this winter.

The destructive conditions forced Perth Airport to use a back up generator on Tuesday evening, after a high-voltage transmission pole was damaged.

The chaos plunged the airport into darkness as flights were delayed and cancelled and frustrated travellers were left stranded.

About 8100 homes and businesses remained without power on Wednesday morning due to storm-related outages – down from 35,000 at the peak on Tuesday.

The damaging winds were felt across the country, with VIC SES receiving 216 calls for assistance in the 24 hours to 6am Wednesday, mainly over fallen trees.

Meanwhile, emergency services in WA answered more than 440 calls for help since Tuesday afternoon and another 51 in the 24 hours to Tuesday night and 10 on Wednesday morning for SA SES.

Mount William in VIC was smashed by winds of up to 122km/h and NSW experienced its highest gusts of up to 107km/h at the snow mountains.

Spring deluge on the cards as Australia battles climate ‘on steroids’

Looking ahead, BOM is warning damaging winds and dangerous surf are likely to hit SA, VIC, TAS, NSW and the ACT, as windy conditions finally ease in WA.

A second in a series of cold fronts will move through southern Australia on Thursday and is expected to bring heavy rainfall and potential flooding for northeast VIC and south-east NSW, meteorologist Dean Narramore warned.

“Last night we saw a very strong cold front move through South Australia and Victoria and that brought damaging winds to numerous locations,” he said.

“But it is this next cold front that has got a link to tropical moisture that is really going to bring our heavy rainfall threat as we move into tomorrow.”

Winds are expected to temporarily ease in SA on Wednesday night before re-intensifying on Thursday, with a severe weather warning in place for damaging winds across most districts.

Damaging winds are set to re-develop over the eastern ranges in VIC on Wednesday night, with heavy rainfall expected on Thursday.

A severe weather warning is in place for parts of East Gippsland, North East and West and South Gippsland Forecast Districts, and a flood watch has been issued for parts of the state’s northeast.

In NSW, damaging winds will continue over the southeast, with gusts stronger than 125km/h likely to continue for alpine areas.

Lashings of rain which may lead to flash flooding could develop across the Snowy Mountains and the South West Slopes from early Thursday morning and the northern parts of the Central Tablelands from Thursday afternoon.

A flood watch is current for inland NSW central and south west catchments.

A hole has opened in the sun’s atmosphere. Another solar storm is coming