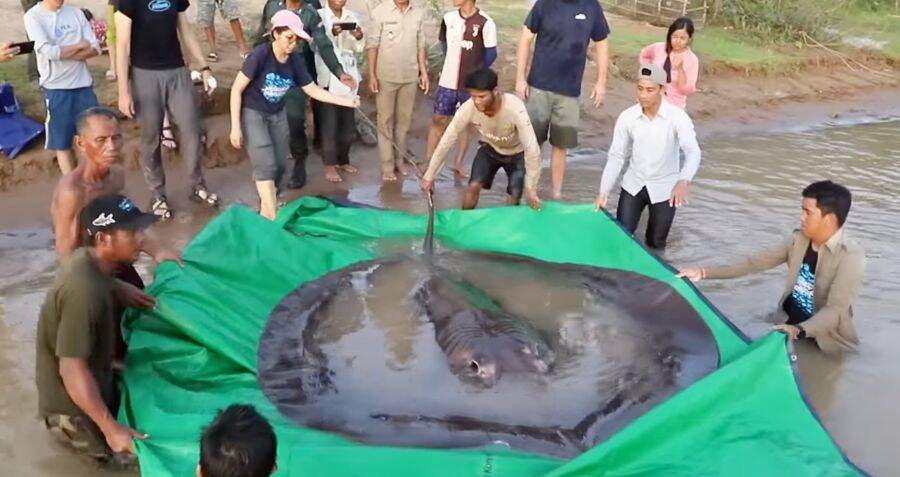 AJ+/TwitterThe giant stingray was tagged and released back into the water.

Villagers fishing in Cambodia’s Mekong River recently hauled in a massive, 661-pound stingray that’s believed to be the largest freshwater fish ever documented. The creature was caught on June 13, and researchers from Wonders of the Mekong, a conservation group that works to protect the river’s wildlife, quickly arrived to study the endangered animal.

Named Boramy, after the Khmer word for “full moon,” the 13-foot fish was caught off the northern Mekong River island of Koh Preah, and it took 12 men to lug it ashore. The fishermen went right to Hogan’s team, which is sponsored by the U.S. Agency for International Development (USAID), with news of the catch. Then, Wonders of the Mekong scientists set up three industrial scales on the island to weigh the stingray.

Hogan said that this catch further proves that the Mekong is a critical breeding ground for the giant stingray. In just the past year, at least three enormous stingrays have been caught in the area, including one weighing 400 pounds, the New York Times reports.

“The fact that the world’s largest freshwater fish was caught in the Mekong is remarkable,” Hogan said. “This is a heavily populated region, and the river faces a ton of challenges, including lots of fishing.”

Indeed, the stingrays of the Mekong River — and all its other giant freshwater fish — are increasingly threatened.

Running through China, Myanmar, Laos, Thailand, Cambodia, and Vietnam, the Mekong hosts the third-most diverse fish population in the world, according to the Mekong River Commission. However, dam-building, overfishing, pollution, and saltwater intrusion threaten its giant migratory species, which need all the space they can get to breed and survive.

The river’s giant stingrays have taken the brunt of the damage from all these manmade and environmental factors though, according to Wonders of the Mekong. Despite fishing restrictions and other efforts, there have been a number of mass death events in recent years.

Fortunately, in another first, the Wonders of the Mekong team was able to tag the giant stingray. Scientists fitted Boramy with an acoustic tag that will track her movements for the next year with the help of 36 underwater receivers, the Times reported.

It’s the first time the team has tagged a fish using the new array of receivers, and Hogan hopes to soon tag hundreds more in the “very understudied” river system — which is also home to freshwater dolphins and giant catfish.

And a healthy female the size of Boramy — plus the other giant stingrays caught and released this year — could mean signs of hope for the Mekong River’s freshwater population.

“It’s almost inconceivable that a fish this large still occurs in a river as heavily fished and developed as the Mekong,” Hogan said.

Boramy takes the world record from a catfish caught in northern Thailand back in 2005 that weighed in at 646 pounds.

Now that you’ve read about Boramy the stingray, the largest known freshwater fish in the world, learn all about the most bizarre freshwater fish ever caught. Then, discover the freakish “faceless” fish of Australia.