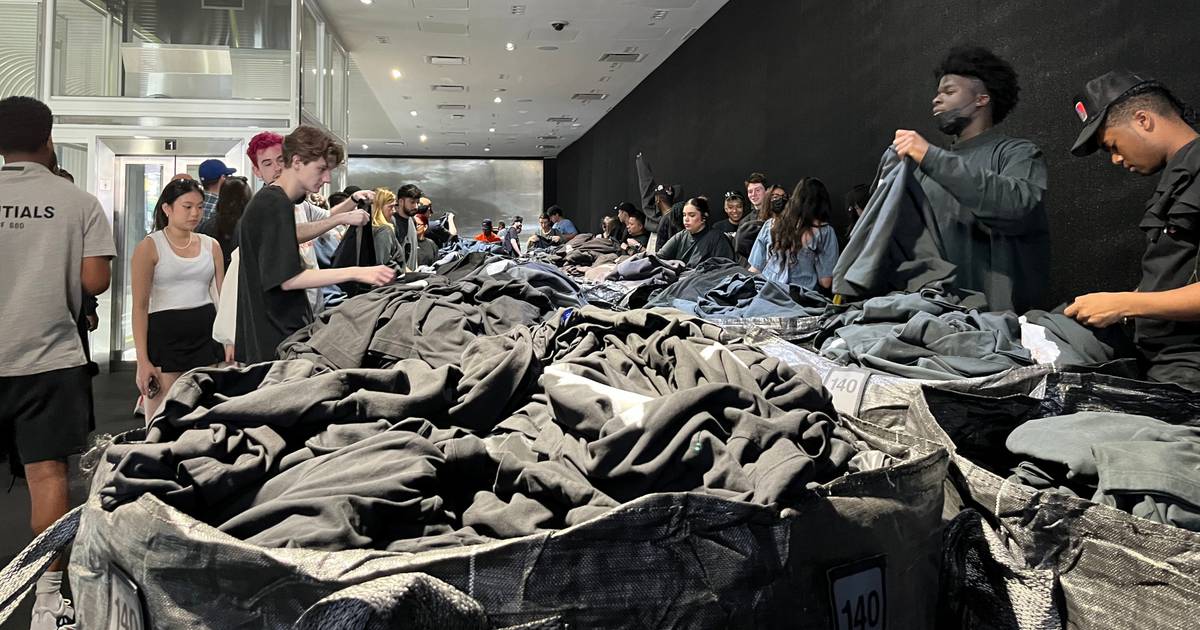 The first thing shoppers will probably notice on entering the Yeezy Gap “experience” that opened in New York’s Times Square today is the bags.

They’re not accessories. Instead of hanging on racks or neatly folded on tables, the eight styles on sale from the “Yeezy Gap Engineered by Balenciaga” collection were piled into overflowing black plastic bags. Shoppers, some of whom waited for hours to enter, were sifting through the T-shirts and hoodies to find sizes and get a better look at the clothes.

The new space marks the first time Yeezy Gap product has been available for purchase at a physical retail store and the set-up is planned to be replicated at select Gap locations around the US. In Times Square, it consisted of a small area with a black floor and black walls in the entryway of a regular Gap store, which was still running as usual at the bottom of an escalator as if in an alternate universe.

That disconnect between the two brands has been a key challenge in Gap’s partnership with rapper Kanye West. While items like hoodies from the collaboration have sold well and generated plenty of hype, it hasn’t done much to lift Gap itself. The company has seemed unable to halt its streak of disappointing sales, which have also spread to Old Navy, once a bright spot in Gap Inc.’s portfolio, while struggling with leadership turnover including the recent departure of Sonia Syngal as chief executive.

Bringing Yeezy Gap to Gap stores is the biggest step so far in integrating the two brands more closely, though the physical space mostly seemed a reminder of how far apart they are. In the press materials sent out, it was described as “utilitarian,” though it could easily veer into dystopian.

“I see Ye all over this,” said Etho Bambino, a shopper who said he arrived around 7 a.m. for the 10 a.m. opening. He said he spotted Balenciaga’s influence, too, but not Gap’s.

Just before the store opened, shoppers were lined up down the block and around the corner, even though the opening wasn’t publicised beforehand. Darren Payton, 26, was first in line, having gotten there around 6 a.m., he said. He heard about the opening on the Instagram site Supreme Leaks News early that morning as he was getting off work. He hadn’t shopped the previous drops online because he was unsure of sizing and wanted to see the clothes in person.

Bambino learned of it from a friend in a group chat, Frankie, 24, who was also there shopping and declined to give his last name. Both had made purchases, though Frankie’s was for his brother. He said he had already bought $5,000 worth of clothing for himself during the online drops. The purchases were to keep, not resell.

Both said they enjoyed the Yeezy Gap shop. It was different, Bambino noted. He had never shopped that way.

Asked if he ever shopped at the Gap itself, he said he grew up shopping there but that changed as he got older.

“But Kanye though, anything he do, I’m with it,” he said.