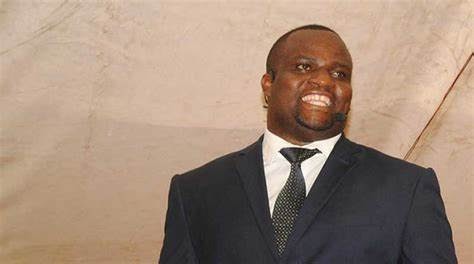 THE trial of ZBC radio presenter Rutendo Makuti on
allegations of attempting to extort money from leader of Goodness and Mercy
Ministries Tapiwa Freddy by threatening to expose their love affair to the
public has been set for next month.

Makuti’s trial has been set to September 8 where she is
expected to jointly appear with Chief Chikwaka (Witness Bungu), former police
office Gibson Jaji, and ZBC staffer Mutetepi Maushe.

Freddy was charged, but acquitted of raping Makuti and the
present trial follows on complaints made to the police by Freddy.

The State alleges that when Makuti and Freddy had a love
affair, and while they were still together, she allegedly started threatening
him that if he did not meet her financial and material demands she would expose
the affair to the public.

In August last year, Freddy was summoned by Chief Chikwaka
to his homestead, but after he was tipped off that there might be some police
officers who wanted to extort money from him he then left without entering the
chiefly homestead, it is alleged.

But as he was returning to Harare, he was said to have been
stopped by police manning a roadblock along Mutoko Road just after the intersection
near Chief Chikwaka’s homestead.

The State alleges that the police said they had been
instructed by Inspector Jaji and Chief Chikwaka not to allow him to pass
through.  After a few minutes, two men
arrived at the roadblock and introduced themselves as Chief Chikwaka and
Inspector Jaji.

They allegedly ordered Freddy to drive to his place, but he
refused to comply, according to the State.

It is alleged that Inspector Jaji forcefully entered
Freddy’s car and ordered him to drive to the Chief’s homestead where he
discovered some uniformed police officers seated in a hut with six assistants
to the chief.

The State alleged that Chief Chikwaka started accusing
Freddy of raping Makuti and having sexual relations with her barely a year
after the death of her husband, which was against their traditions.

He allegedly told the clergyman to pay something for
violating the traditions, but refused to deal with the rape allegations since
the police had to handle criminal cases.

It is said that Freddy felt that whatever was happening was
illegal, but he was allegedly pressured to promise to pay US$15 000 and three
goats and promised to return on a later date with the items.

Allegations are that Chief Chikwaka made him sign an
agreement, which was prepared by Inspector Jaji and who promised to track him
down in Harare if he failed to pay, and pick him up during his church services.

It is said that Chief Chikwaka told Freddy that if he
failed to comply he would leak a video of him he had recorded to the public. The
court heard that when they returned to Harare, Makuti asked Freddy to give her
the money since she was the one who was involved with him.

She then allegedly threatened that if he failed to give her
the money she would expose their love affair to the public through someone
called Tatelicious.

Out of fear and pressure, Freddy allegedly gave Makuti a
Mercedes Benz E-250 and she allegedly warned him never to reveal their deal and
made him sign an agreement, saying it was a way of settling thir differences.

After some days, Makuti allegedly started threatening
Freddy, saying his secretary Nollen Mundawaro had insulted her and she wanted
US$20 000 as compensation.

She allegedly told him that Ms Mundawaro could not
represent his church on their radio and television programmes.

The other ZBC staffer, Maushe, allegedly phoned Freddy that
he had up to the end of the day to pay the US$20 000 and sign an
acknowledgement that he had raped Makuti.

It was at this stage that Freddy lodged a complaint with
the police. He was tried on rape charges and found not guilty with the court
commenting unfavourably on the allegations. Herald