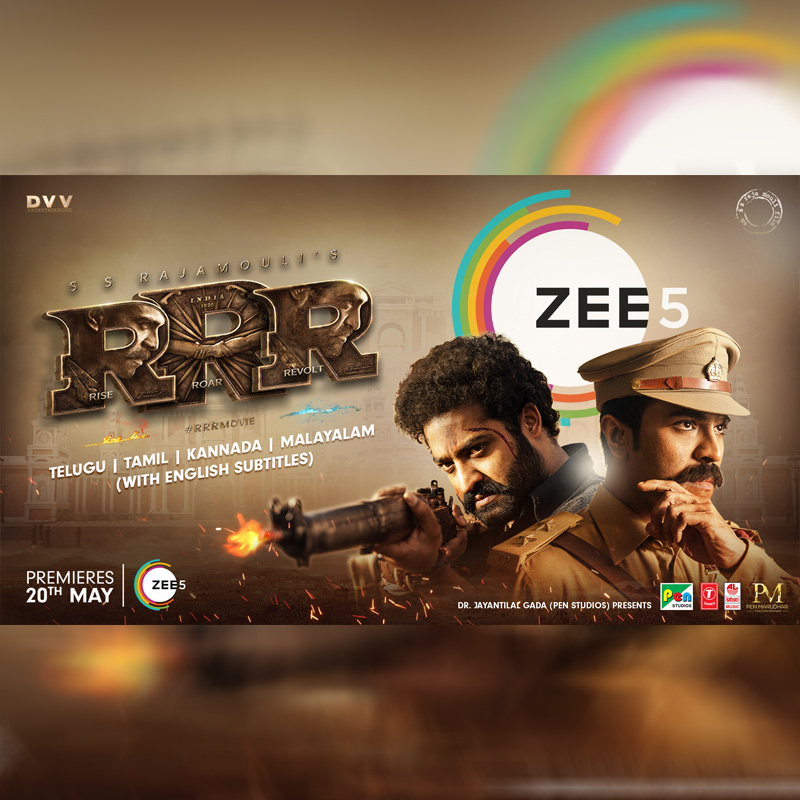 After registering a tremendous success on theatrical release, RRR is all set to hit the OTT screens. On the eve of superstar NTR’s birthday, ZEE5 has announced the release of the blockbuster movie ‘RRR’ on ZEE5 on 20 May 2022. Expanding its TVOD portfolio, ZEE5 is set to launch the movie in multiple regional languages Tamil Telugu Kannada Malayalam with English subtitle across the globe in TVOD.

According to the trade reports, the film remains at the top of box office charts with Rs 1100+ Cr box office collection worldwide.

RRR- Rise Roar Revolt is based on the journey of two legendary revolutionaries depicting fire and water far away from their homeland. The superlative performance by Young Tiger Jr NTR and Mega Star Ram Charan has captivated audiences’ minds across geographies making it a landmark movie in Indian film industry.

The film, directed by SS Rajamouli and produced by D. V. V. Danayya of DVV Entertainment, featuring Jr. NTR, Ram Charan & Alia Bhatt in the lead characters, had its worldwide theatrical release on 25 March, 2022. The film went on to become a national rage and a milestone in the southern entertainment industry; clocking a roaring success at the box office, and is now set to be released on ZEE5 for viewers across the globe to watch in their preferred language with English subtitles.

Commenting on the announcement, ZEE5 chief business officer Manish Kalra said, “We are happy to bring RRR for our audiences in multiple languages, enabling them to consume in their preferred format. At ZEE5 the focus has always been to democratise content, making it accessible and economical for the larger audience. We have invested in building a diverse and strong portfolio for TVOD, in line with our plans to enhance in-home entertainment experiences. We are excited to see the response for the most celebrated movie of 2022.”

Pen Studios’ CMD Jayantilal Gada said, “We are happy to associate with ZEE5, and proud that Pen Studios is instrumental in enhancing the reach of S.S. Rajamouli Ji’s RRR, which is one of the finest films and the pride of Indian cinema. RRR will now be available in four south Indian languages Telugu, Tamil, Malayalam and Kannada to its viewers in TVOD format from 20 May.”